It's a lovely Sunday morning here in North Carolina and I'm offering a small sample from my latest book, a historical mystery called The Vital Principle. Just a small bit to enjoy with your Sunday coffee and muffin.

The Vital Principle is a historical mystery featuring The Second Sons Inquiry Agency. It's been released at a special introductory price of $.99. 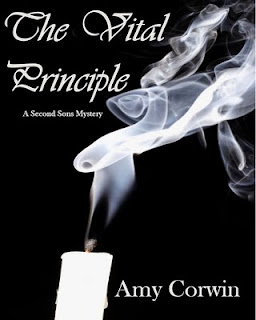 Backcover
In 1815, an inquiry agent, Mr. Knighton Gaunt, is asked by Lord Crowley to attend a séance with the express purpose of revealing the spiritualist as a fraud. When the séance ends abruptly, Lord Crowley is poisoned during the turmoil by an unseen killer.

Gaunt is now left to investigate not only fraud, but murder. Suspicion turns first to the spiritualist, Miss Prudence Barnard, but as Gaunt digs deeper into the twisted history of the guests at Rosecrest, he discovers more deadly secrets. Inevitably, long-time friends turn against one another as the tension mounts, and Gaunt is challenged to separate fact from fiction before another death at Rosecrest.

The Vital Principle is the first mystery in the Second Sons Inquiry Agency series and features coolly intellectual Mr. Knighton Gaunt, the agency’s founder. This witty, historical whodunit in the tradition of Bruce Alexander’s Blind Justice, will keep you guessing until the unexpected end.

“Murder, mystery, and a dash of romance combined with witty dialogue and unforgettable characters make The Vital Principle a book that will definitely go on my keeper shelf!” —Lilly Gayle, author of Into the Darkness and Slightly Tarnished.

Excerpt
In this excerpt, Miss Barnard is questioned about her possible role in the murder of her host. She's an outsider in a close group of friends and finds herself in the unfortunate position of being the easiest target.

As if aware of her scrutiny, Mr. Gaunt edged closer. He spoke in low tones no one else could hear. “You’re very composed, Miss Barnard.”

“For a murderess? Would tears avail me? Or convince anyone of my innocence?”

“They might. A woman’s tears are often most efficacious.”

“Except when the decision has already been made. A trial seems almost superfluous, doesn’t it?” Her voice was low and biting with anger. A deep feeling of ill-use made it difficult for her to remain calm.

“No one has accused you,” Mr. Gaunt replied. “And if you had a hand in this, you’ll get a fair hearing.”

“Then you do think I murdered Lord Crowley? What possible motive could I have had?”
“For one thing, you didn’t seem pleased when he requested my attendance tonight.”
“I didn’t arrange this entertainment, the dowager did. And it appears to me, the mystery should be why I murdered Lord Crowley instead of simply doing away with you. If you believe I was so upset by your presence.” Frustration and fear compressed her stomach into a cold lump.
“You knew why he asked me here,” he stated flatly.
“Really? Why? Pray enlighten me. I’m all agog to hear.”
“To prove you’re a fraud taking advantage of an elderly widow.”

“Taking advantage? By reassuring the poor dear that whatever silly misdemeanor she believes she committed before her husband died is unimportant? How is that taking advantage of her?”

“You’re better qualified to answer that particular question than I. But I’m sure it’s profitable.”
“Profitable?” She laughed bitterly. When the other men glanced at her, she put her hand over her mouth and turned her inappropriate laughter into a cough. “If you call a frusty little room and a few meals profitable. I’m a guest here, nothing more.” Then she added with a coldly sweet smile, “Guests aren’t paid. Or weren’t you aware of that?”
“So kindness was your only motivation?” His black eyes bored into hers. “How can we trust what you say when you conduct these ridiculous entertainments and pretend to speak to the dead?”
She arched a mocking eyebrow. “What makes you think I can’t?”
“Come now. You can’t expect me to believe you’re capable of communicating with the spirit world. Or that you even believe such a thing is possible.”
“I believe there are many things we don’t understand. I refuse to close my mind to the possibility simply because it’s difficult to prove,” she temporized, knowing only too well the dangers of trying to argue about spirit communications.
If there wasn’t a spirit world, then she’d be forced to acknowledge that she was a complete fraud. And even though she hadn't, yet, reached that unseen world and had used a number of tricks to suggest that she had, she always hoped that one day some apparition might answer her call. There was always the possibility.
Mr. Gaunt smiled and his expression grew even more sardonic. “Then let’s be more specific and examine what we can prove. Did you speak to the dowager’s previous husband?”
“Perhaps not this evening. However, I’m sure the words I wrote were what he would have relayed, if he could have done so.”

“No, I merely—”
“It was not the truth!” His lips thinned and anger ignited a slow burning fire in his eyes. “Her husband did not speak through you. Admit it.”

She tilted her head to one side, examining him. “Do you believe her husband did not love her?”

“I have no idea. That’s not the point.”
“Then you don’t know if it was the truth or not.” She offered, instinctively knowing the men would tear her apart like a pack of hungry dogs if she reacted emotionally. Her mind raced ahead, abnormally clear, encased in the fragile ice of logic that could shatter at any moment and leave her raging at their accusations. “And it eased the dowager’s mind. So I fail to see I did anything wrong.”
Mr. Gaunt said, “You mislead—”
“No. I told a desperately lonely woman what she needed to hear. That’s the sum of it. There are many truths. You have yours. I have mine.”
“There is only one truth.”
“Nonsense.” She folded her hands at her waist and turned partially away, unable to bear the intense scrutiny of his hard eyes. Her fingers felt stiff and icy with fear. “I refuse to discuss this any further. It’s futile. You’ll believe what you wish. If you chose not to trust me, then so be it. But regardless of what you think, I did not kill Lord Crowley.”

Beautifully written. I would love to read more.

Nice excerpt. The concept sounds intriguing and I think you've done a great job of capturing the time period.

Thank you both! I really appreciate it.

Yes, I like this a lot -- many of the samples I read are interesting but not my kind of book. But this is definitely something I would read. I just finished Megan Chance's "The Spiritualist", if you haven't read it you might like it.

Yes, I like this a lot -- many of the samples I read are interesting but not my kind of book. But this is definitely something I would read. I just finished Megan Chance's "The Spiritualist", if you haven't read it you might like it.

Wow, I love the cover, Amy, and the book sounds really intriguing!

Thanks again! and I really appreciate the recommendation for Megan Chance's "The Spiritualist". I'm about to go on a business trip to Chicago and I want to "refill" my Kindle. I'm going to head on over to Amazon now and check that book out!

Sounds like a great book. I loved the excerpt from "The Necklace" because it promised humor which I absolutely love in a romance novel. I feel that if the hero and heroine can laugh together, that's so key to their relationship lasting!